Gene information encoded by DNA is transcribed into an RNA molecule, which matures through splicing, editing, capping and poly-A tailing to become a messenger RNA (mRNA) that is translated into proteins as presented below.

Figure 1: Messenger RNA. In the nucleus (yellow), genes are transcribed into RNA (green), which is modified and exported to the cytosol. The mature mRNA (boxed) is translated into proteins.

A key feature of mRNA is its transient nature; mRNA is degraded within minutes or hours, depending on its intrinsic stability in a specific cellular surrounding.
The utilization of mRNA instead of DNA or viruses for gene therapy was introduced in 1990 (Wolff et al., 1990). Because mRNAs are transiently present in the cytosol, their use is efficacious and safe. We have implemented the first GMP production of mRNA and have evaluated the safety and efficacy of directly injected mRNA vaccines (Pascolo, 2004, 2006, 2008; Rittig et al., 2011, 2016; Weide et al., 2008a; Weide et al., 2008b; Weide et al., 2009; Wolff et al., 1990). Currently, mRNA-based therapeutic programs are being implemented all over the world for vaccination against cancer and infections as well as gene therapy. 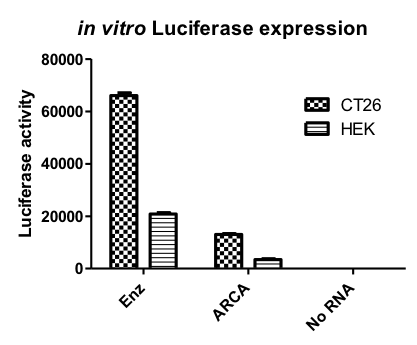 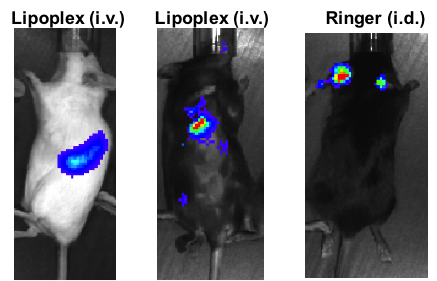 Figure 2: Optimization of mRNA. Left panel: Human (HEK) or mouse (CT26) cells were transfected in vitro with luciferase-encoding mRNA made by different methods such as enzymatically capped (Enz) versus capped cotranscriptional incorporation of ARCA cap (ARCA). The results show that the enzymatic capping improves the translation of the synthetic mRNA compared to incorporation of ARCA. Right panel: Mice were injected intravenously (i.v.) or intradermally (i.d.) with optimized formulations of mRNA coding for luciferase. One day later, the expression of luciferase was detected using in vivo imaging. Depending on the formulation and injection site, expression of luciferase can be detected in targeted organs/tissues.

Through the mRNA platform, mRNA molecules and formulations are designed, produced and tested in the adequate preclinical models and are eventually translated into human clinical studies. Beyond “Translational Cancer Research”, the mRNA platform welcomes collaborations to extend the use of therapeutic mRNA to all medical needs.